Everything You Need To Know About Facebook S-1 Filing

“There are more than two billion global Internet users, according to an industry source, and we aim to connect all of them,” the company said in its S-1 form, published by the SEC.

Here are some of the best stats and facts from the S-1:

END_OF_DOCUMENT_TOKEN_TO_BE_REPLACED

When Facebook launched its Subscribe feature in mid-September, quite a few journalists sighed in relief. This, we thought, is what we needed: A way to communicate with a larger audience of readers while maintaining a somewhat private personal life behind a friend wall. I’m sure it’s a great option to other professionals, celebrities and wannabe celebrities as well.

I enabled subscriptions the day they launched, mostly to test it out. After all, who would be interested in reading the occasionally inane updates of a non-famous non-reporter? More than 9,000 subscribers later, I found out.

In the six weeks since, I’ve found some things I like and dislike about the feature. This ongoing experiment has helped me to formulate a few tips that may help anyone who wants to use this feature.

END_OF_DOCUMENT_TOKEN_TO_BE_REPLACED 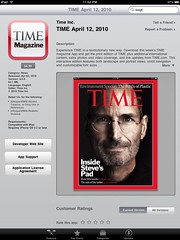 Time magazine recently announced that the late Steve Jobs has been nominated to be the magazine’s 2011 Person of the Year. If he wins, he would be the first person to receive the award posthumously and the second tech titan to win in as many years. Facebook co-founder Mark Zuckerberg took home the honor in 2010.

Jobs has graced the cover of Time several times. Since his first appearance in 1982, Jobs has been on the cover alone, or accompanied by one of his inventions, a total of seven times, including a memorial cover the week he died.

But not everyone thinks the Apple co-founder deserves the Person of the Year title. International Business Times argued that, though Jobs has contributed much in his lifetime, during 2011 specifically his cancer battle prevented him from doing enough to qualify for the honor.

“When judged on his contributions to the world this year, Jobs had understandably done very little compared to the other nominees,” wrote the IBT, also pointing out that while Jobs’ products have made our lives more enjoyable, the contributions he has made do not measure up to other nominees who are “fighting to make the world a better place.”

END_OF_DOCUMENT_TOKEN_TO_BE_REPLACED

How To Use The New Facebook To See Who Unfriends You

For many, being “unfriended” is a fate worse than death.

But it’s not something you’d know about right away.

In previous versions of Facebook, there was no easy way to see which of your “friends” had decided to sever your relationship on the social network. Sure, you could always go to their profile to check, but that required the effort of remembering who they were.

If you’ve already enabled your new profile, you can check it out right now.

END_OF_DOCUMENT_TOKEN_TO_BE_REPLACED

Facebook is dramatically redesigning its users’ profile pages to create what CEO Mark Zuckerberg says is a “new way to express who you are.”

Zuckerberg introduced the Facebook “timeline” Thursday in San Francisco at the company’s f8 conference for some 2,000 entrepreneurs, developers and journalists. The event is also being broadcast to more than 100,000 online viewers.

The timeline is reminiscent of an online scrapbook, with the most important photos and text that users have shared on Facebook over the years. It’s Facebook’s attempt at growing from an online hangout to a homestead, where people express their real selves and merge their online and offline lives. The timeline can go back to include years before Facebook even existed, so users can add photos and events from, say 1995 when they got married or 1970 when they were born.

END_OF_DOCUMENT_TOKEN_TO_BE_REPLACED

The talk show queen is scheduled to do a live video interview with Facebook on Thursday, September 8, almost exactly a year after Oprah brought Facebook CEO Mark Zuckerberg on her show.

The discussion with Oprah will be streamed via Facebook Live and will kick off at 1:30PM PT. Facebook is inviting people to submit their questions for Oprah on a Facebook Page dedicated to the event.

Some of the queries submitted so far include, “Mrs. Winfrey, if you had one week to live what would you do with your week?” or “What drives you Oprah to stay connected with the people of the world?” One user also asked Oprah to ask Barbra Streisand a question on her behalf (“We know that you are friends with Barbra Streisand… Could you please thank Barbra Streisand for my husband and I? Because of Barbra, we met the love of our lives – each other!”).