The death of Osama Bin Laden was one of the most tweeted events in history — and generated the highest sustained rate of tweets ever.

Twitter has released updated statistics on the usage of its platform last night. Previously, the social media company reported that more than 4,000 tweets were sent per second during the beginning and the end of Obama’s speech. It now says the real number of tweets was about 25% higher.

At 11:00 p.m. ET, just before Obama’s speech, users generated 5,106 tweets per second, the highest single volume of tweets during the night. At 11:45 p.m., just when he finished his speech, Twitter users were sending 5,008 tweets per second.

However, the record for most tweets sent in the same second is still 6,939 — which happened during the most recent New Year in Japan..

If the Twitterverse is to be believed, President Obama is about to announce the death of terrorist and 9-11 mastermind Osama Bin Laden, in an impromptu announcement broadcast on Whitehouse.gov and TV this Sunday night at 10:45 EST.

The news actually hit Twitter before the President’s broadcast; CNN’s Steve Brusk first tweeted that the announcement was National Security-related at around 7:25pm PST.

Both Urbahn and Scott’s tweets have been re-tweeted hundreds of times. (The NYT’s Brian Stelter has a more detailed account of how the news broke here).

What’s amazing is that the news is already out before the President has even spoken.

Update: The White House keeps pushing back the announcement, but CNN and the New York Times have just confirmed that Bin Laden was killed, with CNN adding the detail that the event took place in a mansion outside of Islamabad, Pakistan.

Update 2: The President has confirmed that Bin Laden was killed in an operation today in the city of Abbottabad, Pakistan (not Islamabad), after a firefight executed by a small team of US Human Ops troops. 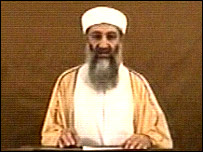 Within about two hours of reports first surfacing (and since confirmed by the President) that Osama Bin Laden had been killed, a Facebook Page titled “Osama Bin Laden is DEAD” has already accumulated more than 150,000 “likes.”

The page appears to be adding thousands of likes by the minute with users also sharing hundreds of comments and links to stories about the news.

Interestingly, the page itself appears to have been setup well prior to tonight as a way to advocate the theory that Bin Laden had actually died long ago.

The page description reads in part: “Osama Bin Laden has not been found and will never be found because he died a long time ago. This may be news to you because it wasn’t in the news. His death is critical to the CIA because they want you to believe in this so called ‘War on terror’ which has made the world a more dangerous place. If Osama Bin Laden was alive, he would’ve been found – just like Saddam Hussein.”

Nonetheless, the page is now serving as a real-time discussion board for the historic news.

While the social network did not satisfy the letter’s requests to make privacy the default, create a vetting process for app developers and turn on HTTPS automatically, it did come through on the promises it made in an announcement at President Obama’s White House Conference on Bullying Prevention last month. Here’s what’s new: